DO NOT ADJUST YOUR SET 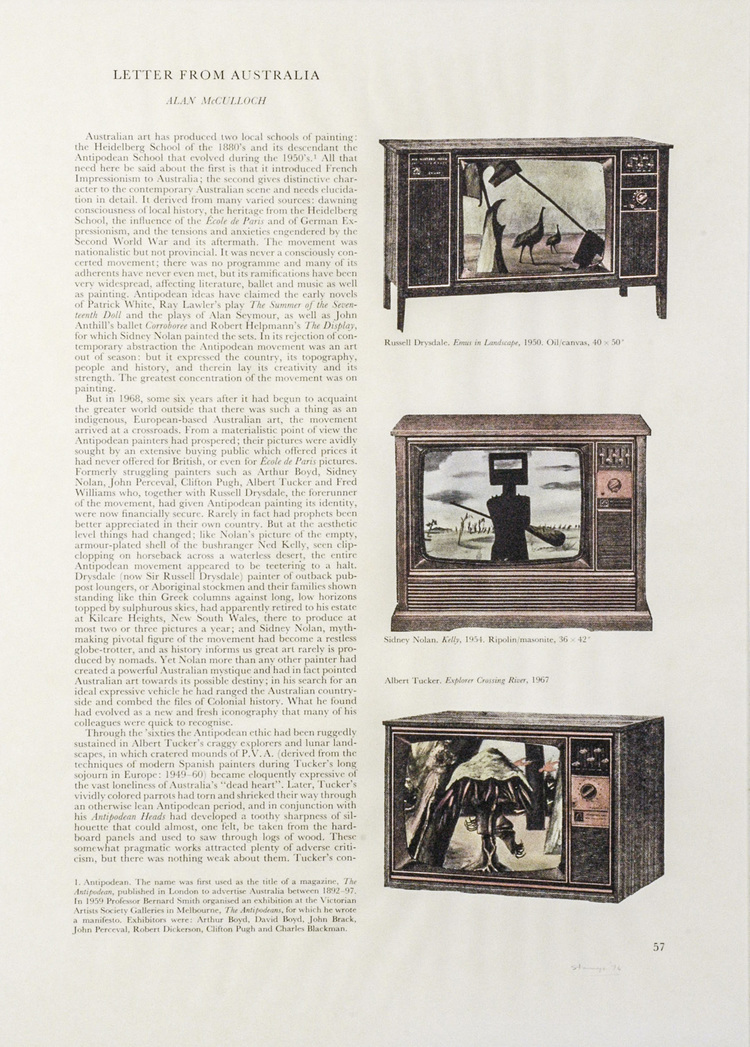 You are reading the first posting for the Cruthers Art Foundation blog.

In the months and years ahead, we hope to inform, entertain, educate, shock, irritate, delight, surprise [alongside every other verb in the thesaurus] you by discussing women’s art and the broad field of associated issues, current and historic, that impact upon audience reception of women’s art in Australia and globally. Above all we want our readers to be inspired to – in the words of our 2012 exhibition at the Lawrence Wilson Art Gallery in Perth – “Look, look again” at women’s art, and indeed never stop looking at women’s art in all its variety and diversity. Given that public commentary on women’s achievements across a wide spectrum of activity in Australia, from sport to culture to commerce to politics is in quantitative terms alone far less than that devoted to men, this art blog can make a practical step in shifting this unequal weighting.

Whilst subjects and writers will frequently centre upon the Cruthers Collection of Women’s Art, from the micro level of an individual artwork to the macro level of policy and theory, this blog hopes to also provide a clearing house, info exchange and catchment for a wide range of relevant ideas, events and comments. Interviews with makers, doers, thinkers and curators, exhibition and event reviews, guest postings, curated mini themes and festivals, are part of future plans.

The Cruthers family date their introduction to collecting women’s art to the year 1974, when two generations of the family began purchasing art, with some landmark acquisitions of modernist women’s art occurring shortly after their entry into visiting galleries and buying art. By the early 1990s, “Word seeped east” in the words of John Cruthers, writing for the PICA showing of the collection for the National Women’s Art Event in 1995, “that there was an interesting collection of women’s art in Perth, and a growing stream of people came to see it.”  Museum directors and curators, art historians and collectors all passed through the Cruthers home to view the art. Individual works were often loaned to exhibitions and in 1994 curator, gallerist and artist Jo Holder who had long known the collection suggested that it be shown publicly as part of the coordinated festival of exhibitions of women artists in both public and commercial galleries across Australia, organised by Holder and others under the auspices of Associate Professor Joan Kerr. This was the first time that a large tranche of the artworks was visible outside the family home. Placing the artworks in an artspace affirmed the cultural importance of the collection at a national level.

It became clear that preserving works by sometimes little known and under-appreciated artists and making these artists and their characteristic themes and preoccupations available to the public was only one part of the story. A multitude of factors have led to the lack of profile and status accorded women artists trans-historically, and to achieve their mission the Cruthers family increasingly realised that they had to be engaged on behalf of women’s art through a variety of channels. One crucial area certainly is the preservation of the artworks and making them permanently accessible to the public. This was begun in 2007 by the gift of the core collection of 460 artworks to the University of Western Australia, and subsequent donations of work and funding of curatorial support to assist UWA manage the gift. At the same time the family began the Cruthers Art Foundation.

However the issues do not only centre upon the Cruthers Collection of Women’s Art and the works it contains, or even specifically onsite in Perth. The Countess Report indicated that whilst equality in employment statistics is growing within the visual arts sector, particular in curatorial and boards of management areas of ARI’s and in educational contexts, women’s art is seen less frequently than men’s across a wide range of exhibition spaces and contexts. The impact and the causes are diffused nationally and happen at both at structural level of the arts industry and at the small scale of an individual’s own experience with making and showing work. Nor is the issue to be found only in auction houses or dealer’s stockrooms, but it also impacts upon current experiences of art education and art practice. To that end the Foundation is developing from support for the CCWA at UWA to engaging in learning about and then seeking to change a range of issues around practice. Its first funded project was The Countess Report, a large scale national gathering and comparing of data about the relative proportion of male and female artists, art and activities across the contemporary educational, museum, commercial gallery and art publication sectors. The second funded project will focus on historical research into women artists. This blog is also a means to circulate ideas about women and art and to encourage debate.

Writing for the Foundation’s blog promises to be an exciting and important challenge for me, with a potentially transformative impact. My own POV is like that of Erica McGilchrist, one of the founders of the Women’s Art Register in 1975. Whilst McGilchrist was committed to radical and non-representational art as well as social justice issues from the 1950s onwards, she also consciously restrained from shaping selection policy at the Women’ s Art Register visibly to her own taste. Partly she felt that not enough was known about the gamut of women’s creative activities in the 1970s to make an accurate and effective call upon what was worthwhile or not. She also was strongly haunted by the Nazi Holocaust to the extent that she often had disturbing dreams about extermination camps, and she disliked competitive hierarchies and systems dominated by elites and “in crowds”. She wrote in scathing terms of a range of such structures from the AFL to Australian universities and although her politics were radical, she never hesitated to call out the left as well as the right for their mistakes and poor judgment. The agora has become even more contested, judgemental and bitter in the years since 1975, and in some ways both the loudness and the self-righteousness resembles the rough justice and gang mentality of the school yard. Social media has allowed more points of view to be articulated but has dramatically reduced the fuse of mutual tolerance.

In the same spirit women’s art will be defined broadly, across media and discipline, and across the known and the unfamiliar, contemporary and historic, to speak to a wide range of browsers and readers.

SHEILA acknowledges the traditional custodians of country, Aboriginal and Torres Strait Islander people, throughout Australia and recognises their continuing connection to land, waters and community. We pay our respects to them and their cultures; and to Elders both past and present.